The Vietnam Trail Marathon was in its inaugural edition. The team already organised the Vietnam Mountain Marathon and the Jungle Marathon so were experienced in race directing. Nonetheless I didn’t expect such a quality show.

We landed at 0530hrs and got a taxi into Hanoi were we collected our race bibs.

From there it was an organised bus ride 5hours to the north west. Destination Moc Chau.

Moc Chau reminded me of a mountain resort but with a rather misplaced corporate luxury hotel in the middle of it. The race brief was amidst a performance of local traditional dance.

It felt very patriotic as they displayed what was good about their province including dancing around with pictures of milk urn, it was very colourful and jovial. Buffet dinner with lots of sticky rice, spring rolls and noodles and then bed. 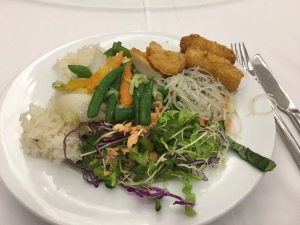 The alarm was set for 2.30am. It was 8.30pm in the UK so on getting up it felt like I definitely wanted to be heading to bed but typically I woke before the alarm thinking ‘oh god I’ve overslept’. However, pre race routine kicks in and I headed towards the kettle for a coffee and bowl of oats. The bus left at 3am and the race started at 4am. It was warm to me coming from a British winter but all the locals were really wrapped up in coats and gloves. They kept touching me and asking me why I wasn’t cold!

Moc Chau is an area famous in Vietnam for its tea plantations and peach blossom. The race took place at the height of the peach blossom season so people were bringing the trees into their homes for lunar new year. Mopeds with trees attached to them flooded the roads.

This race took my breath away. Running through the dark for the first 2hours or was over pretty technical terrain. I used the LED Lenser SEO 7R.  As the darkness lifted I was amazed to see what I was running through. We climbed up to a plateau in the dark on a technical single track. It was humid so the rocks were slippery and everytime I reached to grasp something for balance it was thorny and spiky. The plateau revealed small villages that no car can access. They were so deeply hidden in rugged terrain with no running water or electricity. However the people did have plenty of energy as they tended their crops and smiled and waved. The children ran along side laughing which was a very precious experience.

The trails weaving through the landscape changed from jungle like with roots and vines that tangled between your feet to rural farms with cows, buffalo and pigs to flower fields, tea plantations and blossom orchards. However the think sticky mud didn’t change – it was so slidey and hard to move through.

One French runner lost the sole of his Hoka Shoes and so had to finish the last 30km with just the uppers of his shoes held onto his feet by socks worn over the top.

My race was made because of the scenery.

I had no expectations. I felt pretty rotten from the beginning. I had done 3 weeks of decent running but nothing over 4hrs or 20miles. Then 10days of being ill and then a week limping about on my sore foot hoping it would hold up to the rigours of 70km. My body clock wasn’t sure if I should be sleeping or whether breakfast was appropriate. I felt nauseous especially as the sun came up and the humidity rose. My foot was really sore (long standing issue I manage). I guess it’s fair to say I wasn’t feeling the love for ultra-running. In hindsight I had arrived in Vietnam after a really tiring and stressful 3 or so months so not sure I was in the most optimal condition but whinging (even to myself) in a place like this was totally ridiculous. I resolved to just make sure I would do my best.

The race continued up and down slipping and sliding over its 3645m and I kept pushing on needing to see more beautiful scenery. The race was superbly marked and although I ran alone I never felt unsafe.

I was pleased to finish I must admit.

It took a few hours to stop feeling sick but the sun shone and lying prone in a tea plantation was delightfully relaxing.

The people were so friendly. I mingled amongst runners and traditionally dressed locals.

I felt a bit like a giant at times. I was delighted to win a wooden water buffalo having said hello to so many on route.

It was a great day for many reasons. I’d been able to run in one of the most beautiful places in the world; to help put things into perspective; Jon won his age group in the 21km race; the sun shone and I met more new friends.

3 days relaxing afterwards was spent kayaking, swimming, cave exploring all in Ha Long Bay. The name Hạ Long means ‘descending dragon’ and it’s a UNESCO World Heritage site. The bay features about 2000 limestone islets in an area around 1,553 km2.  The limestone has gone through 500 million years of formation with tectonic influenced plate activity, rain and humidity shaping the topography of the area. 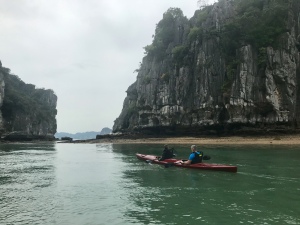 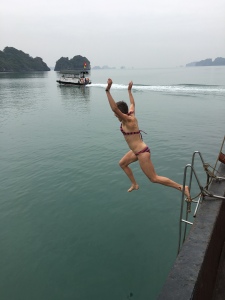 Heading back to the chaos of Hanoi was quite a contrast. The red on the traffic lights doesn’t mean red! Just cross with confidence apparently and you’ll be dodged!

There was weasel coffee to be tried- the weasel eats the coffee cherries, partially digests  the coffee beans, poos them out where they are collected, cleaned, dried and roasted. Following the French invasion in the 1800s, coffee was introduced into Vietnam, but was considered a luxury so only the French colonists along with Nguyen dynasty’s nobles could drink it. The farmers were forbidden from consuming it therefore the only way to drink it was to pick up the Weasel poo which was a block of coffee beans sticking together. They soon discovered it was more aromatic, smoother and less bitter.

With time before leaving the country for the 11hour flight home there was also time for a Vietnamese massage which was a whole body experience. Lots of pressure, clicks and cracks!

An amazing place! So many experiences. The trip contrasted; from being physically demanding in the mountains motivated by the people and breathtaking landscape; and yet mentally relaxing with the time on the ocean.